Being ill sucks – especially when the world is banging on your eardrums to make you aware that there is a non-zero chance of the current malaise leading to your untimely death – along with millions of others.

For the young and healthy, the odds of staying alive through the current crisis are over 99%. For the elderly, the odds are somewhere in the region of 80%, which means that if you’re 75 years or older, you have a one in five chance of choking to death on your own mucous membranes in the next few months.

That sucks, but one of the (non-medical) side effects of the coronavirus pandemic is that an awful lot of people are going to be staying inside for anywhere between a few weeks and a few months.

For freelance writers such as myself, the situation is an opportunity and a liability.

People stuck inside for 24 hours per day over an extended period get bored. It’s impossible to spend the entirety of your waking hours watching Netflix or Amazon Prime movies. Even if you could, how long before you run out of content?

And for the content writers out there, there’ll be no shortage of SEO optimised how-to guide sites being set up to capitalise on all the new hobbies being taken up.

Ten ways you can make a single tin of soup last a week? I’m sure there’ll be a call for it soon. The great quarantined masses will be a goldmine for marketers wanting eyeballs on their ads.

Not to mention people who will pay to have copy written to market their essential oils, discarded bum fluff, or lightly flavoured tap water written up as a potential cure for Covid 19.

There’s also the matter of family. A lot of freelancers have kids, and most days they’re in school, leaving you to crack on with your work in blessed peace and quiet. If you’re confined at home under quarantine, they are too. They’re in your living room, they’re in your office, they’re in your… way.

And then there’s the small matter that there’s a pretty good chance that someone you know or love is going to die. Yeah. That sucks.

Believe it or not, running planetearth.press is not a full time occupation, it’s a side project I work on while I’m not being paid to write for other people. Usually, I score gigs either through existing relationships or by pitching directly to publications – occasionally I have to scour the internet for work, and that sucks

Life is hard as freelance writer. Some weeks you’ll spend half of your time searching for writing gigs, a quarter of your time working out how you’re going to structure your articles, with the rest of your working day split evenly between procrastinating and actually getting stuff done.

And there are… other distractions…

For me, the planning and procrastinating is non-negotiable. But with a little preparation, and a neat piece of antique software relying on an ancient protocol from the last century, the search time can be reduced to practically zero.

As far as I’m aware, most of the freelance jobs board – whether paid or otherwise – find theirs the same way.

Here’s what you need:

All your jobs in one place

RSS stands for Really Simple Syndication, and is an old-school technology from back when the web was starting to become popular. It offered sites a means of having their news automatically appear on the front page of a different site – usually via means of a ticker.

Like many things (such as this writer), what was once cool is now lame. No-one uses a ticker anymore, because it’s not 1998. But RSS feeds are still published, and RSS readers are able to easily pull in news from around the internet.

Unlike a web browser, which requires you to manually input searches every time you want to run them, an RSS client will save your searches, and hunt for fresh news in a predetermined list of places every time you hit refresh.

I use QuiteRSS, which is free and is available for Linux, Windows, and probably Mac, too.

NB: I have no relationship with QuiteRSS, and no-one is paying me for this recommendation either directly or indirectly. Other RSS readers are out there, but I have yet to find one which has the same breadth of genuinely useful features for writers seeking work.

So, where are you going to find freelance writing jobs for your RSS reader to display for you?

Subreddits can be a great start, and I have managed to get some good gigs from both r/forhire and r/hireawriter. I’ve had less luck with r/writingopportunities.

Job boards such as Blogging Pro, and writejobs.info both offer feeds – although almost all of their info is scraped the same way ours is, and there is very little difference between them.

Craigslist is excellent – provided you can be bothered to set up a query for every single city where blogging jobs are likely to be found.

A craigslist RSS feed for writing jobs in San Antonio would look like this:

Just swap out San Antonio for the location of your choice.

Most sites will give you an RSS feed if you ask them nicely – If it’s a wordpress based site, adding ‘/feed’ after the base URL will direct you to the RSS feed. And I’m sure you all have your own secret places.

The big exception is search engines.

Google is, hands-down, the best search engine on the planet. When it arrived in the public consciousness back in the early 2000s, it pushed all other search engines aside. The competition was annihilated. Heard anything from Altavista lately? Yahoo even? Didn’t think so.

Google’s search results are so relevant, so up-to-date, so personal, that almost every non-Google engine out there now pays Google for the privilege of using its search results.

Unfortunately, Google does not like providing RSS feeds of its results. There’s no technical reason why, if you search for “remote writing jobs” it shouldn’t give the results as an RSS feed which your reader can digest along with a results for a dozen similar queries such as “writers wanted”, “looking for writers’ or whatever your go-to search terms are.

But while it is technically possible to get search results in RSS form from Google, it is hella difficult, requires a dev account and doesn’t always work. Google doesn’t want you looking at its search results anywhere except on the Google site. If you’re viewing in an RSS reader, how are they supposed to show you ads and scrape information from you?

Type a query into Bing, copy the resulting URL, and your RSS reader will display any fresh results any time you hit the button.

Look at all of that Bing goodness

So, you’ve downloaded QuiteRSS to your system, loaded it up with your feeds, and hit go. Suddenly your screen is full of irrelevant crap.

You’ve pulled down the whole of r/forhire plus the craigslist listings for ‘writer’ in every city in the United States, along with any part time gig work advertisers wanted to dump into the category. So many listings for dishwashers, uber drivers, massage therapists, and developers. You don’t want it and you don’t need it.

In QuiteRSS, click on the menu, go down to tools and press ‘News Filters.’ Here you’ll be able to create rules which will apply to particular feeds, and filter them out before you even see them. 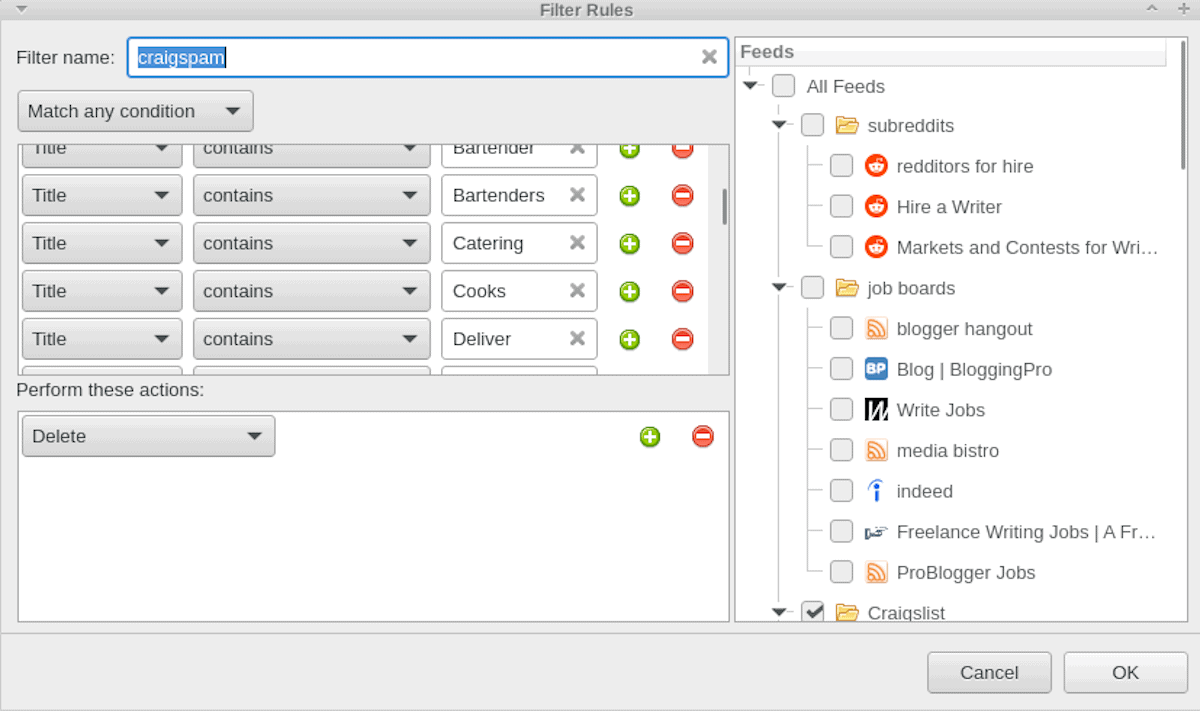 If the title contains any of the terms you specify, you can either mark them as read, or nuke them into your virtual trashcan.

None of the adverts for accountants, bellhops, companions or developers make it onto my main feed window. Only people and businesses looking for writers. On the hiring subreddits, you’ll want to filter out any posts containing [For Hire] or [Hire Me] in the title.

Of course, you’re getting more-or-less the same jobs as you’d get by waiting for the blogging sites to put up their daily digests, but by setting up your own system, you’re potentially getting them early. Hell, leave your client open, and watch them as they roll in throughout the day. Laugh as you avoid paying subscription fees.