Scrivener is a great tool for writers, and is used by aspiring authors to organise their thoughts and spew their words onto virtual pages with the minimum of fuss.

At the very least, it’s a way to avoid doing any actually writing while you figure out its bells and whistles.

Among it’s many features and attractions, it helps novice novelists to arrange layouts, plots, and summaries on virtual corkboards, categorise their research, and a whole bunch of other stuff I haven’t had time to explore yet.

The reason I haven’t had time to explore Scrivener’s many undoubtedly excellent features is that there isn’t a functioning Linux version available.

To me, this is bizarre - Literature & Latte created an employable beta many years ago, got it to the stage where it was actually usable and then abandoned it some time in 2011.

That sucks balls. 2011 was a long time ago and the world has moved on. The Crow is running i3-wm on top of the latest iteration of Pop OS 22.04. Surely, installing Scrivener can’t be as easy as downloading a .deb file and running dpkg?

It isn’t. Most of the libraries and dependencies Scrivener needs to run are also obsolete, they’re difficult to find and there are big holes in the Ubuntu archive where packages have disappeared without a trace. According to comments left on an ancient Linux Journal article, the Scrivener installation was frustrating future fictioneers at least as far back as Ubuntu 14.04.

After an afternoon of dead-ends, broken links, absent archives, forgotten files, and general frustration, I actually managed to get it up and running.

Unlike the Windows and Mac versions of Scrivener, the Linux Beta is completely free of charge, and if you follow these meandering instructions, you can be tapping out the next New York Times bestseller in a matter of minutes.

It’s simpler than you think, so pop open a terminal, and we’ll start installing the dependencies.

The first thing you should know is that you’re actually going to be compiling one package from source - purely because there isn’t an up-to-date ready built deb available at the time of writing (or at least I couldn’t find one). It’s nothing to worry about, but you need to make sure you have the right tools to do it first.

Create a new temporary directory and cd into it, then:

and when archive has downloaded, enter these commands in sequence:

Great. If everything went smoothly, you will no longer get the ‘libpng12.so.0: cannot open shared object file:’ error when you try to launch scrivener.

You only need a few more packages, so

Install the deb files you just downloaded with:

Again, everything should be going smoothly at this point.

Grab the Linux Scrivener Beta deb and then install:

And that’s it. Launch by typing scrivener into the terminal, or with drun / rofi. If you’re the type of person who indulges in full desktop environments, icons, and other such frivolities, you can follow these archived instructions from 2012. Ignore the first part of the instructions (they no longer work), and pick up from:

Great! It’s difficult to believe that this is a long-abandoned beta version. Seriously - it’s a quality product.

Launch it by whatever method you choose and you’re greeted with a Getting Started window - giving you the option to choose from four disfferent types of writing setups: Blank, Fiction, Non-fiction, scriptwriting, and Miscellaneous.

There are huge differences between these - after all, while the essence of any piece of writing is to get words onto a page, and it’s you who has to put them there, it’s a good idea to provide a correctly formatted work to the intern who decides whether to toss your script in the trash. 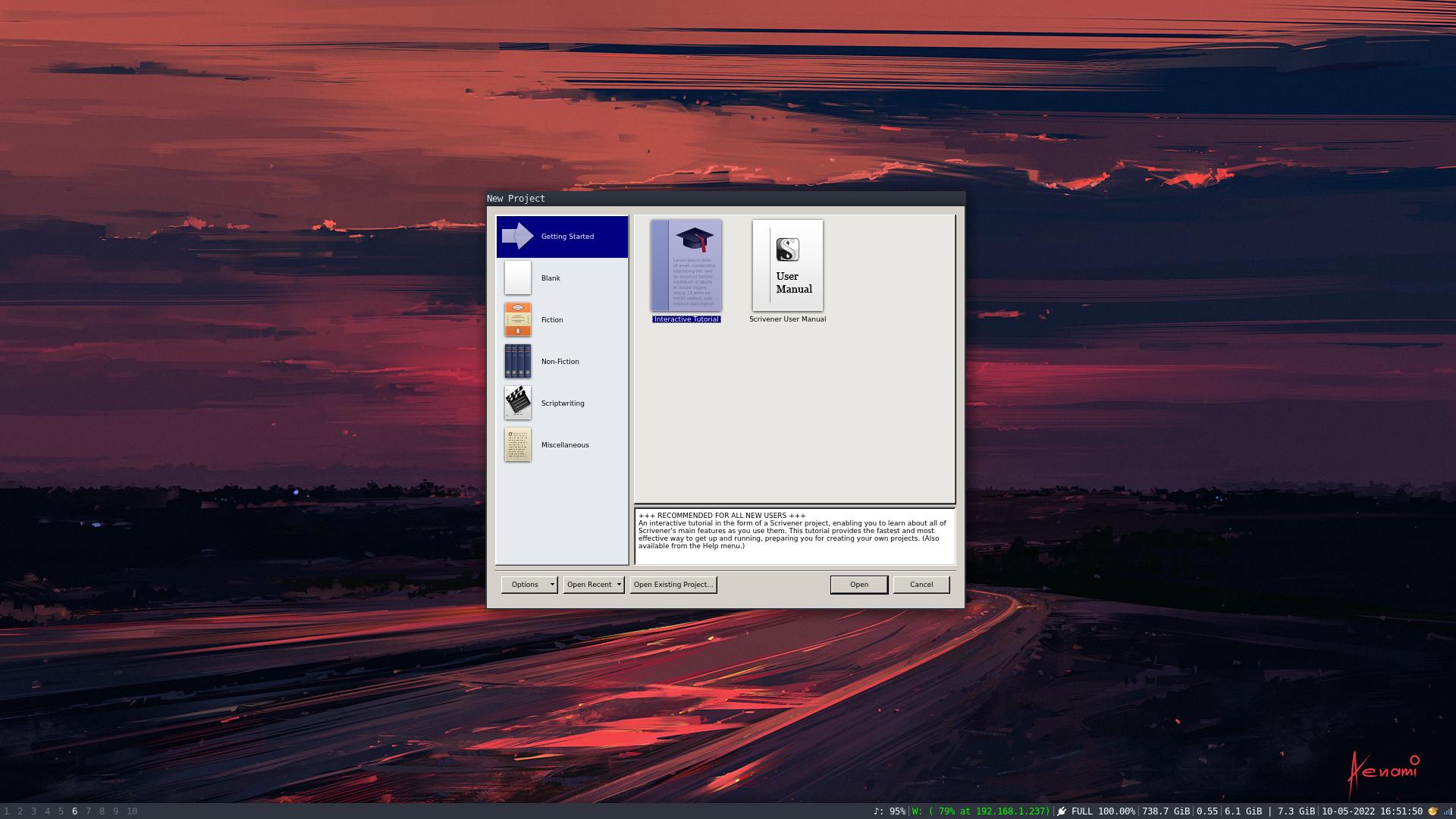 Blank gives you a blank and empty project, but the others provide a range of different templates which may or may not suit what you’re doing. From within scriptwriting, for instance, you can choose from BBC format for radio; BBC format for taped drama series; A comic script template provided by graphic novel and comics writer Antony Johnston; A template project set up for writing Hollywood screenplays ready for printing directly or exporting to Final Draft; The title page, compile settings and structure for creating both UK and US stage play manuscripts.

I mean, holy shit. Again - this is a decade old free beta.

But before you create any documents, you should probably dive into the epic five part interactive tutorial - itself a massive document running to more than 18,000 words. Or RTFM, which is also also an epic doc. 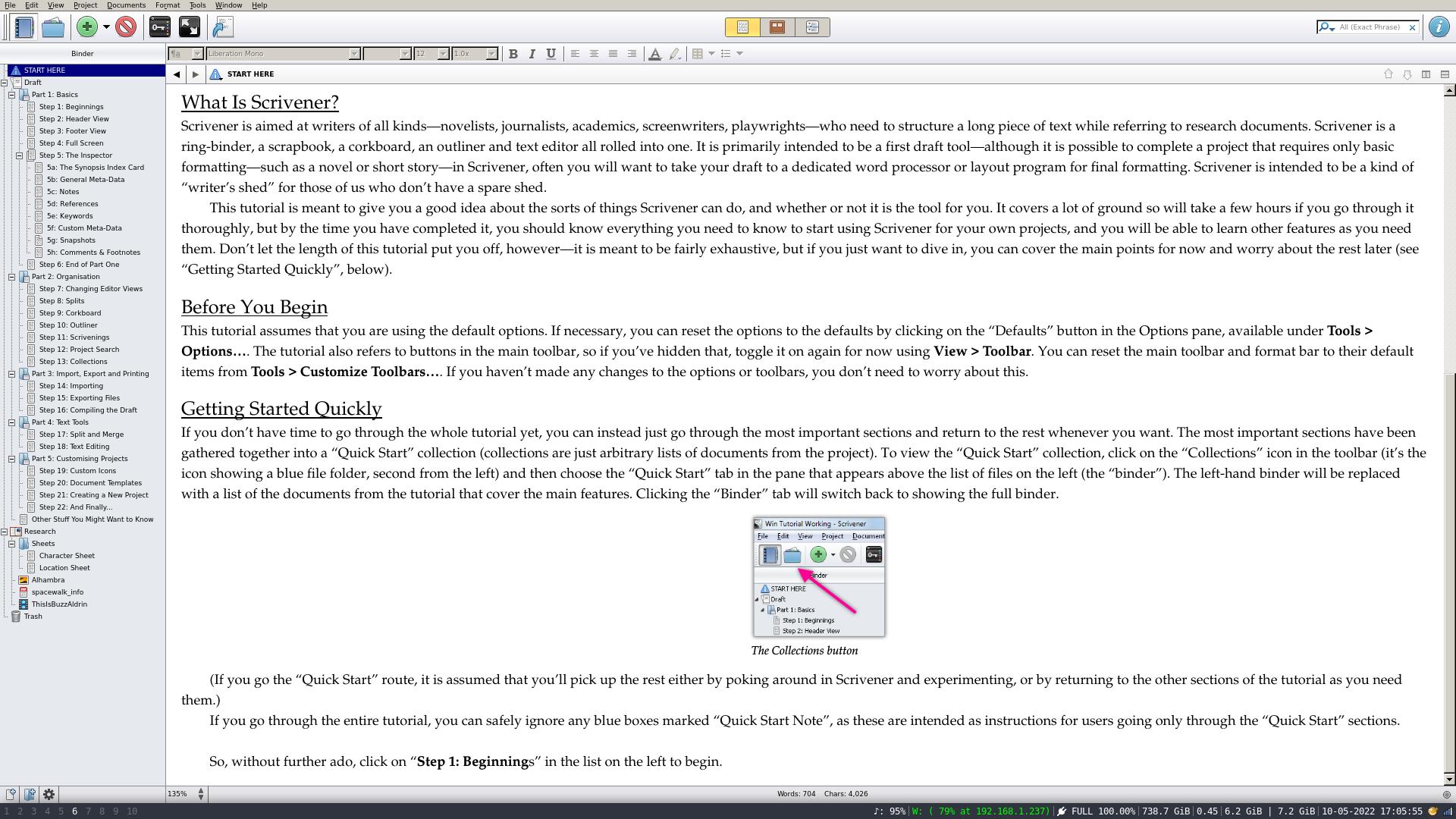 I thoroughly recommend using the tutorial as Scrivener has a lot of features, and you’ll be missing out on a bunch of functionality if you don’t put in a couple of hours to at least make it through part one.

I don’t have Windows or Mac OS, so I can’t say for sure how well the Linux Scrivener Beta stacks up against the latest and greatest Scrivener 3, but for a grand investment of £0, I don’t think there’s a better piece of writing software out there.

Quick tip: Have a read of this archived 2016 thread if you want the spell-check to work :)