If you’re anything like The Crow, you’re constantly enraged at having to pay money for the type of mass produced plastic crap which rolls off a production line in some distant part of the world at a cost of pennies per dozen and is sold at a 10,000% mark-up on Amazon, ebay, or even your local bricks and mortar local store.

There’s no possible justification for charging $6.95 for a wide tooth comb with a manufacturing cost of maybe 2 cents.

Sure, I get that there are overheads in addition to the cost of the materials, there are the costs involved in shipping them by the tens of thousands across 12,000 miles, and I get that marketing costs money.

But it’s not really value for money for the consumer.

It’s not just combs, obviously. It’s every type of weird niknak where the price obviously outstrips the object’s value, worth, and cost. I’m talking hinges, adapters, pipes, cable tidies, mounting brackets. It could be middle age, but I feel aggrieved about every single one of these. Taken advantage of even.

It’s generally the case that in any situation where there’s selling going on, the consumer gets screwed.

Stop being the consumer - be the producer instead

It’s an easy thing to say, but few people would find it practical or desirable to have a factory production line in their back rooms. It’s unlikely you need 10,000 of a thing - you need one or two. You certainly don’t want hundreds of production line workers working 12 hour shifts and then hot-bunking in the spare bedroom.

It’s a problem with a solution.

3D printing is old tech. By which I mean that it’s been around since the 1950s. For the last 70 odd years, it has been possible for individuals without an entire factory to create one-off items for a low material cost.

OK. The 3D printers were pretty crap in the 1950s and barely deserved the name, but by the 1970s, Hot-melt inks were in use and it was actually possible to create usable things. That’s 5 years ago.

For the last 16 years, it’s been possible, if you knew someone with a 3D printer, to print most of the parts of your own 3D printer and assemble it at home. It was called the RepRap and I thought it was going to change the world. It’s utterly inexcusable that in 2021 there isn’t one in every household. 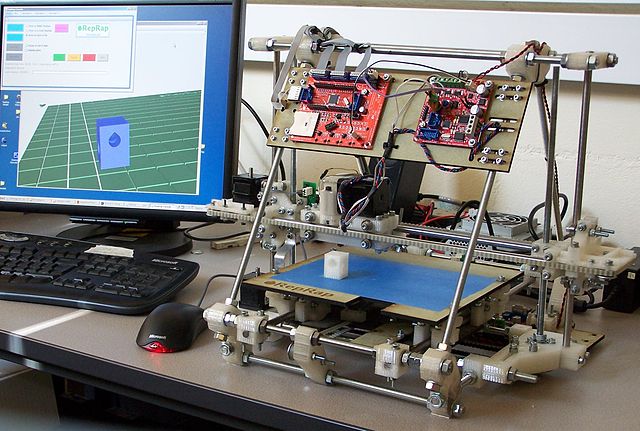 The RepRap Mendel - Who wouldn't want one of these bad boys in their kitchen - Credit: RepRap Project.

The Crow’s excuse is a lack of time, a lack of funds, and the fact that spending a couple of quid here and there isn’t the biggest deal in the world.

Oh - and early filament printed products were quite often fugly.

The difference between filament and SLA printers.

I’ve used 3D printers before, thanks to a makerspace in Liverpool close to the not-so-top-secret location of the Crow’s nest. I’ve created practical things such as a vent cover for my caravan’s heating system, and naturally, printed a bust of my own head. You can see from the photographs that they’re pretty low quality. They also took more than a day to complete. 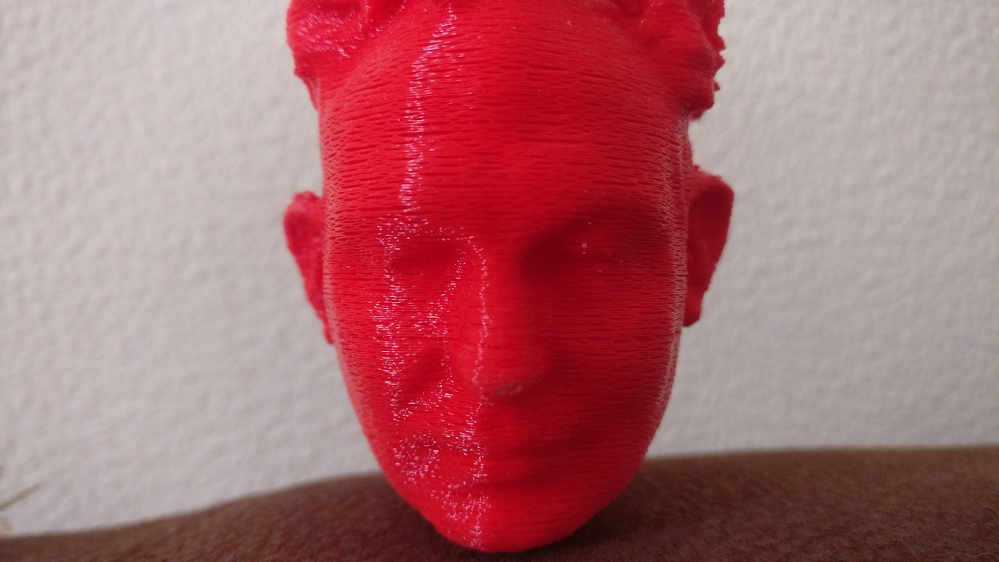 Which is uglier - The object or the subject?

Even demo pieces published on 3D printing forums and the subreddits of reddit need to be carefully filed down and sanded to avoid unsightly bits of fluff and trailing filament. It’s hard work.

SLA printers (also known as resin printers) are different from filament printers in fundamental ways - prepare yourself for a crappy and superficial explanation.

A filament printer works by melting plastic filament, and extruding it through a nozzle to create layers. the nozzle is moved along the X, Y, and Z axes using motors. It works and it’s simple.

SLA printers use ultraviolet LEDS to fuse monomers in the resin into polymers for each layer. Under the resin vat, is, for all intents and purposes, a TV screen. For each slice, certain pixels will light up with bright UV light. Those areas bond with either the bed or the layer above, the bed moves upwards, and the screen illuminates pixels for the next layer.

There is no movement except along the Z access, and no need for more motors. Because the resin is already a liquid, there’s no need to melt it.

What comes out is solid but soft. If your models needs support, now is the time the trim them before dunking into a curing station to subject it to yet

Does that make sense. I think it makes sense. YMMV.

Getting Sticky With Resin

After some consideration I ordered the Anycubic Photon Mono on Wednesday night together with a litre of grey resin and a litre of translucent green resin. 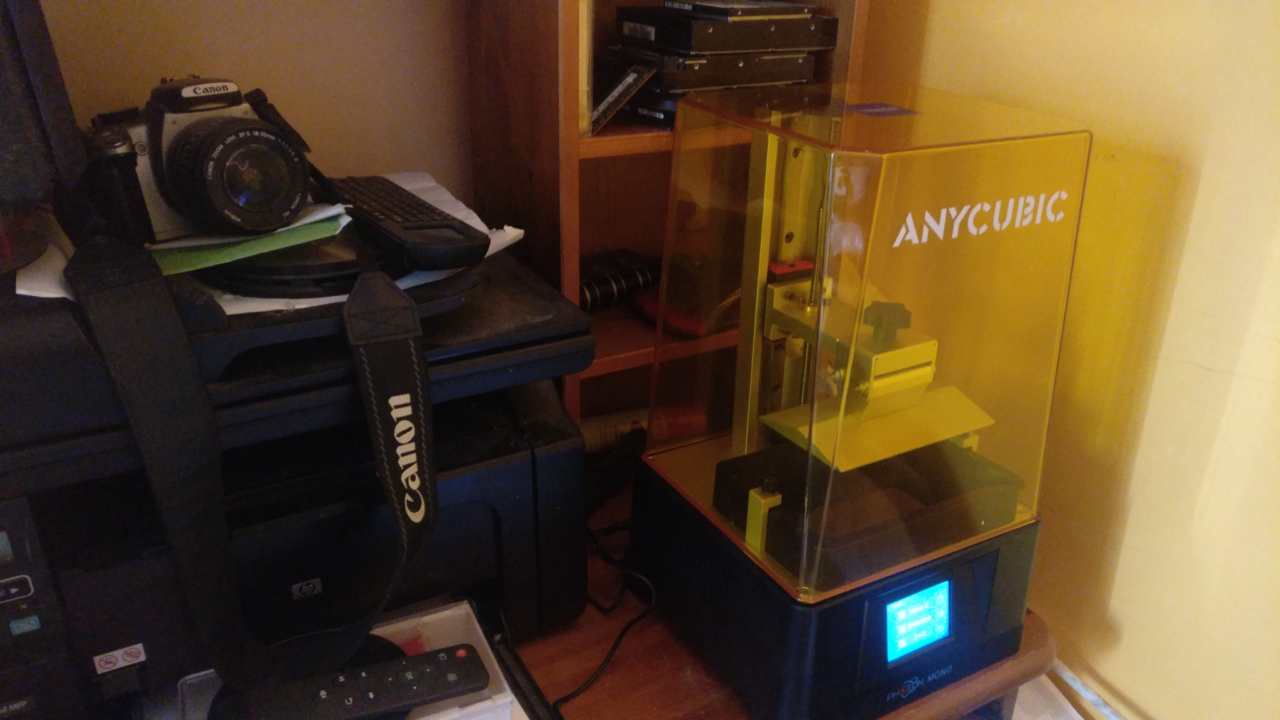 Fits right in, I think you would agree.

Everything had arrived by lunchtime on Friday, and it has been printing non-stop ever since.

I’m going to take a moment here to say how astonishingly easy it is to use.

I had levelled the bed and was actually printing in under a minute.

Yes it really was that simple.

Naturally, I had an entire day to plan for the machine’s arrival and instead of going with the Anycubic demo model - I went with a Sunken Benchy - an interesting take on the standard ‘Benchy’ tugboat which is traditionally used to test filament printers. 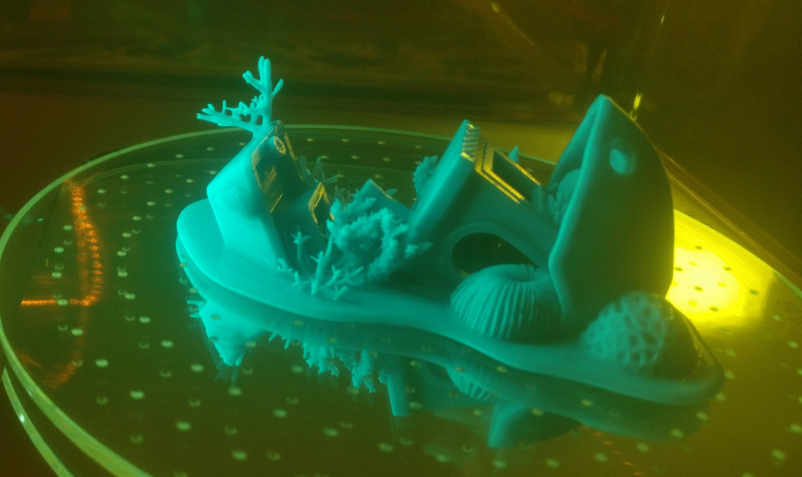 This will be perfect in my 3D printed fishtank

It did not need supports to print and took a grand total of two hours and 10 minutes. That’s not even enough time to watch X-Men: First Class, and only barely enough time to struggle through the banality of Spider-Man 2 with the kids.

Next up was a six inch Eiffel Tower - which took over twelve hours.

The detail is absolutely superb and I was quite happy to add it to the stack of other Eiffel Towers which clutter my house after being brought back as souvenirs from Paris by various family members.

You too, can pretend you spent lockdown in Paris

Here’s the thing. With resin printers (Or the Anycubic Photon Mono at any rate), the length and width of the object doesn’t really make a difference to print time. What matters is height.

This is because the whole of every slice is flashed simultaneously, so it doesn’t matter if, for a particular slice, the print area is 1mm or 1000 mm, it will time the same amount of time. But each new layer is only 50 microns above the last. That stacks up quickly. Or slowly. Whatever -tall things take time.

Bear in mind that the actual printer is only half of the cost. While you don’t actually need a wash and cure station, it makes life that bit easier. It is recommended that you use isopropyl alcohol to wash the prints, but that’s expensive - especially as we are still in a worldwide medical emergency. I add a spoonful of washing powder to warm water and it seems good enough.

With the first two test prints out of the way (and pretty impressive), I started to scour thingiverse for useful things to print which would make my life easier.

In the four days since the Anycubic Photon Mono arrived on my doorstep, I have printed:

A five inch fridge magnet in the shape of a stylised owl; a different owl for use as a glasses stand; a case for my Raspberry Pi Zero W: six tiny war hammer miniatures; a tiny dragon; a tiny dragonfly; a skeleton candle holder (for the goth in the house); a 118 decibel whistle; It's hard to stop

I have not printed one single usable or practical item - apart from the whistle. There have been zero fails or problems.

Anycubic has released software to slice the models ready for printing. It’s called Photon Workshop, but it runs only on Windows and Mac, which sucks for me as I use neither of those platforms. Even attempting to run it in a VM due to lack of GL support is unsuccesful. Double sucks - you cannot export models to the Photon Mono without slicing it first.

I’d love to recommend some free and open source slicing software for Linux but I can’t - at least not one which works with the Anycubic Photon Mono.

It works well. You can use it to position objects on the plate and to add hollows, holes and infill before slicing and exporting.

It’s also free as in beer, but with a limited feature set, compulsory advertising, and a mandatory delay while you watch said advertising. It comes with license checks on initialisation and is a general pain in the arse. As a Linux bod, I’m just not used to this level of bullshit, but currently, I can’t find an alternative. There is a pro subscription, but I don’t want a subscription. Apparently, the Lychee makers will be adding the option for a one time payment for a specific printer. It doesn’t exist yet.

Meh. It’s easy enough to use right now, and I suppose I can put up with ads until something better comes along

Honestly, the Anycubic Photon Mono is hella cool. You should buy one. Other resin printers exist and may be cooler, but I doubt it.

You may consider the means of production well and truly seized.