Electronics, much like people in the 21st century, are disposable. We are slaves to Moore’s law whereby the capabilities of computers grow evermore formidable and blindingly fast. Every new generation of processors, of data storage modules, of screens makes previous ones obsolete in a never ending arms race of technological one-upmanship.

Lawmakers argue about the best way to deal with electronic waste, and environmentalists wax wrathful on the costs associated with recycling 20 year old laptops which were never designed with recycling in mind, while humanitarians wail about the life-shortening conditions in which miners slave to extract the precious metals needed for their production.

And the machines themselves, these masterpieces of human engineering in glass and aluminum and gold and platinum?

They’re tossed. Despite government and local initiatives designed to cut down on electronic waste, and brand specific trade-in initiatives, its often just too much bother for consumers to bag up their old hardware and either return it to the store, or at least put it into the correct dumpster at the nearest refuse and recycling centre.

But just because they’re ancient or slow, and have failing parts, doesn’t mean that they’re junk. Old hardware of any kind can be reused or repurposed in ways their makers possibly never envisioned – or even just dusted off and put to use in another setting.

In Cory Doctorow’s Someone Comes to Town, Someone Leaves Town, released in 2005 under a Creative Commons license, the main character befriends Kurt, a thirty-something cyberpunk running a dumpster-diving operation and using trash computer components to create a mesh WiFi network which to provide free and secure Internet access for the entire neighborhood. It’s the epitome of cyberpunk scavenging made us wonder what other cool stuff people are throwing away.

Towards the end of 2019, we sent our UK correspondent, David Rutland – also a thirty-something cyberpunk – to dive headfirst into the dumpsters (they’re known as skips on this side of the Atlantic), and see what he could drag out and repurpose.

Here’s what he found within half a mile of his home:

Where: In a skip outside a flat above a chippy. In the rain.

With an astonishing 2GB of RAM and the Windows Vista operating system (which was terrible even when it was new) the Aspire 5315 was not too many steps above garbage, even when I had the identical model in 2008. The salvaged model is missing the the right Alt key and F7, while the remaining keys are yellowed with cigarette smoke and age.

The power cable was not immediately obvious in the skip, and I really didn’t want to be seen by passers-by. However, it noisily powered up without problems when connected to my old supply.

I was immediately reminded of how much I hated this laptop, its operating system, its too glossy 15 inch screen, and its tendency to overheat when doing anything as basic as using MS Word on a summers day. To avoid triggering BSOD induced PTSD, I resolved to have nothing more to do this machine in its current form. 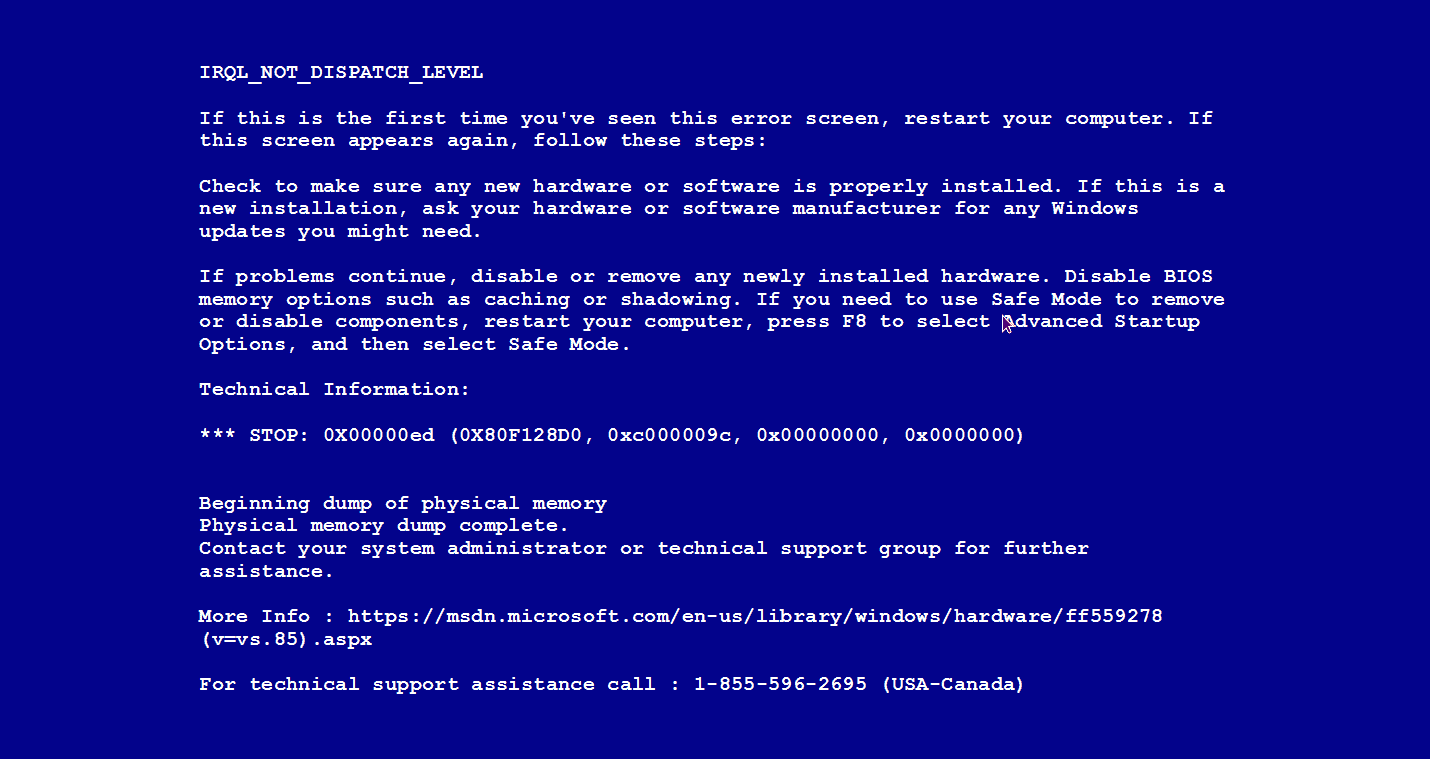 We’ve all seen way too much of this

The 120GB SATA hard drive contained a wealth of films, documentary series, music, and the entire first season of The Sopranos, all of which have been added to my own, personal media library, while the Hard drive itself is being used to back up images of my Raspberry Pi based cloud server.

The meagre 2GB RAM stick has been placed into my 2009 vintage plastic Macbook – bringing the total up to an astonishing 6GB!

Where: Down by the river. In a skip.

The monitor headphones are ridiculous. They’re designed to be used in a home recording studio where groups of performers sing or play instruments at some distance from the PC recording them, and need to hear or block out certain elements of the session. As such, each set of phones comes with a four meter minijack cable. While I do occasionally do some audio work, I have no need of studio quality and even less need to stand in a different room from my computer.

The Bluetooth phones hold enough charge for all day listening, and are now my go-to accessories when I’m editing audio tracks for videos or recording love songs to my wife.

The Sennheisers were given to my two children who watch Youtube videos while getting hopelessly tangled on the way to school. 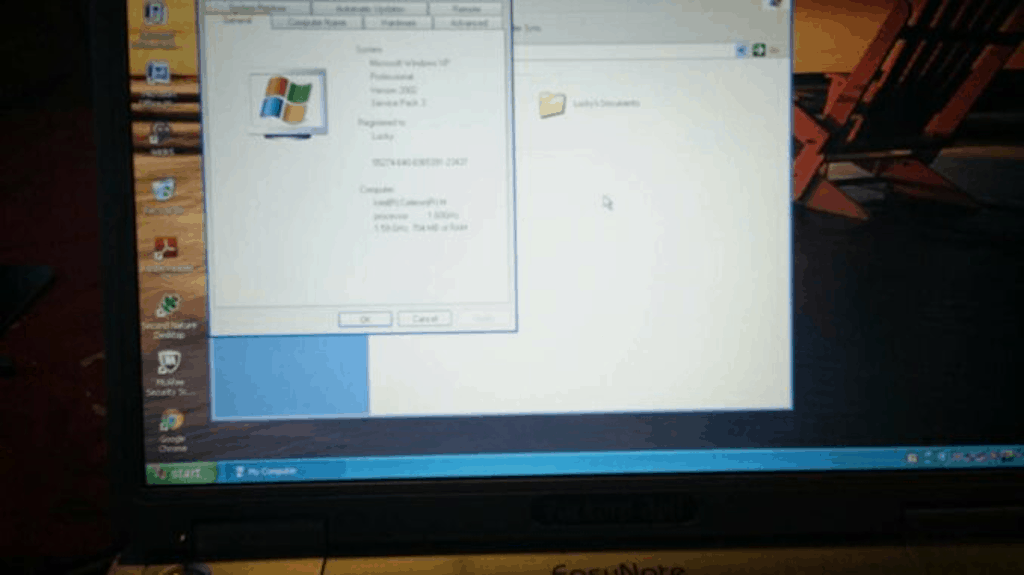 Packard Bell made some of the finest most ubiquitous computer hardware of the 1990s, before posting huge losses towards the end of the decade, and then disappearing entirely from the manufacturing scene with a whimper rather than a bang. With the little surface-level research I was able to carry out, I couldn’t find the exact date of manufacture.

The R1938 came with a power supply, 704MB of RAM and a working copy of Windows XP. It boots quickly, and the 30GB hard drive clicks with a sound which will push 80s and 90s kids into a euphoria of nostalgia. The 2.5″ HDD is boasts an IDE interface, which makes it incompatible with the slightly more modern SATA interfaces on my other hardware.

Although the machine was snappy and responsive, running its pre-installed software, wallpaper rotator, and aftermarket shareware screensavers with the same alacrity it would have had when new, Windows XP is not a suitable operating system for the third decade of the 21st century, and I was loath to let it loose on the internet with an undefended copy of internet explorer.

What’s it good for?

While windows 10 does technically run on 32 bit processors, and a 30GB drive is certainly large enough to take it (I’ve had Windows 10 running from a 16GB drive before now), the install attempt did not go well at all. Nor did the attempt to install any modern Linux distro.

Essentially, this is the perfect laptop for pretending you’re trapped forever on the cusp of the millennium, playing games such as GTA Vice city, and getting back onto first name terms with clippy.

It’s beautiful. It’s all smooth curves and glass and metal and bright vivid colours – simply oozing quality and expert craftsmanship. According to my cursory internet research, the base model came with 1 GB of RAM, but this particular find had been upgraded to 4GB. Unfortunately, the 250GB SATA drive was missing or damaged, and attempting to boot the machine brought up nothing but a flashing question mark.

The iMac requires special tools to open the chassis and the hard drive is located behind the screen, necessitated the removal of more screws than I could count.

Hooking up a spare external 250GB SSD allowed me to install Bionic Beaver, and the machine is now perfect for a pair of septuagenarians who appreciate the large, bright screen, and haven’t truly appreciated that although the hardware has an apple logo, they don’t have Mac OS. It’s snappy, performs beautifully and runs whatever software they need. And it’s an impressively futuristic looking talking point for whenever their septuagenarian friends come visiting.

Imac? I thought that was a hair removal cream for your nether regions

A microwave oven – non functional, but the bulb still worked.

A rather nice Ikea standard lamp.