We have a grainy, overexposed, low-res photograph, and that’s it - aside from the news that Gab - the social network for, erm, people of non-conventional political and societal ways of thinking - is branching out into the cut-throat world of mobile technology with the upcoming launch of a spanky new phone.

Here at The Crow, we don’t usually go for current events - or for making predictions - and to be honest, we’re not massively interested in the current state of consumer technology, but Gab’s announcement and upcoming project is a little special and pulled our eyeballs straight to it. We felt compelled to do a little investigation, a little speculation and to draw our own conclusions about what this means.

In case you’ve been living in a hole for the last few years, Gab is an alternative social network modified from Mastodon, and which provides a social media experience somewhere between Facebook and Twitter.

Visit the front page on any given day and you’ll see plentiful posts from QAnon fanatics, Trump fanatics, religious fanatics, nazis, anti-semites, and others. It also has groups in which the content is considerably less savoury than that which appears on the front page. We’ve written about Gab for another site - if you think we’re exaggerating on the absolute batshit lunacy and nastiness, take a look at our first impressions. Better yet, take a look around the site itself.

Gab, like Parler (another right-wing social media service) has a problem. They’ve been banned from every major appstore and their members are having a hard time connecting on mobile devices. You can’t be a twitter alternative if your members are tied to their desktops can you? And despite lengthy instructions showing members how to sideload the Gab app onto their phone - thereby bypassing the various appstores - or even just add a web shortcut to the homescreen, this is obviously beyond a lot of people. 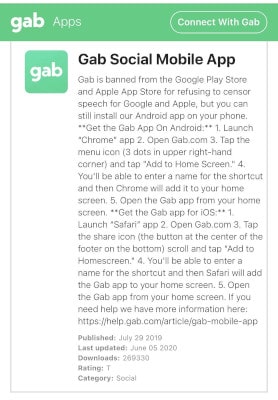 Hence the new phone which was announced with the following explanation / sales pitch:

“If your business is built on the backs of Silicon Valley tyrants (Apple, Google, et al) they can and will attempt to destroy you if and when you become a threat to their interests. They did this to Gab. Then Fortnite. Now Parler. Terrible content of all kinds is available on Twitter and Facebook. Everyone on the planet knows this fact. Yet both companies are on both App Stores.

Apple banning Parler is not the neutral implementation of some objective standard, but rather a cynical, politically motivated gesture and evidence of Silicon Valley elites’ disdain for ordinary Americans. The solution, as always, is not government. It is to build your own. People mock this meme, but Gab lives it. While others whine, we build.

The Big Tech data mining silo must come down. We will no longer be serfs on your digital plantation. You will no longer control our digital destiny. You can’t stop the signal. Stay tuned for pre-order information.

Currently this is the only picture available. It’s definitely a real phone, and it’s being held by a frog, with its Ty ‘Beanie Baby’ label still intact.

A closer look indicates that it may be a Huawei Honor View 20, a pretty solid handset from the end of 2018. Now out of favour since Donald Trump’s crusade against the company led to its hardware being legally unable to use Google’s Play store. This would make sense, as Gab is also unable to use the Play store.

It’s running signal as an encrypted messaging service, it’s connected to the T-Mobile network, and there is no visible sign of the Gab app on screen.

Andrew Torba and his company have a problem. They’ve thrown in hard behind the outgoing president and have long advertised themselves as being an alternative destination for Free thinkers from around the world who aren’t able to express their bizarre views on Twitter or Facebook.

If you get banned from the mainstream networks, you go to Gab, where you will find others of a similar mindset.

The platform has been doing OK. As far as we know, it’s profitable, and is attracting new members by the million as they’re expelled from the domains of decent, non-crazy, people.

In the last few days, following the big tech companies have been acting to to take Gab and Parler offline. AWS booted Parler from their servers with only 24 hours notice. Gab, unlike parler, isn’t relying on AWS or other big tech, deep state, Hillary lovin’ lefty elitists. They have their own physical servers which gives the company a degree of resilience other right wing platforms simply don’t have.

But server hardware is expensive, Gab has been repeatedly blocked from processing payments through any of the major providers, and despite repeated pleas, exhortations, and reservations meant to attract ‘The Donald’ to the platform like some kind of evil genie, he simply isn’t showing up.

Despite its rising numbers, Gab has a very real chance of going under unless the owner finds a new revenue stream. Which is, perhaps, why the Gab Phone exists - or might exist.

The Gab Phone solves two problems - the first being financial - it’s a cash grab from the vulnerable and hard of thinking. Any older phone will do if it can be bought dirt cheap in bulk, rebranded, and can have the Gab app pre-installed. It can be sold, probably through a different company using Gab as a storefront, at an eye-watering markup.

Gab will make money, technically limited Gab users will be able to use the app on mobile, and everybody will be happy and free to get on with their preferred hobbies of collecting Beanie Babies and organising cut-price coups.

Edit: The phone pictured is, according to people who know about such things, a Pixel 4a from the Google Pixel product line. Exactly how this ties in with Torba’s desire to stop himself and his users from lining Google’s pockets, we don’t know.

We consider it unlikely that the phone pictured will be the one which eventually shipped. It’s far more likely that Torba took a quick snap based on what was in his pocket at the time. What actually ends up in users’ hands will more likely be an overpriced piece of shit.

We’ll have to wait and see.


-----------------
[12/Jan/2021:23:49:00] Jesus Christ, mate. That took some deciphering - Maybe you need a new phone ;) I think you're missing the point of both this post and the site itself. I blame Google (other search engines are available) not you. You arrived here because this is on the first page of results for 'Gab Phone' and you have no context as to what it's all about. Feel free to look around while you're here - you'll find it broadly agrees with Torba's stated aim of 'doing it yourself' and offers a shit-ton of handy guides to breaking free of dependence on tech giants. :) - The Crow