Fall, or Dodge In Hell, is a direct sequel to Neal Stephenson’s 2011 techno-thriller, Reamde – possibly the most action-packed 1,500 pages that has ever been written in any genre, ever.

It’s also set in the same alternate universe as Stephenson’s Baroque Cycle – an eight book epic, describing a world which diverged from our own in the late 17th century and gave the characters early access to computers, fractal geometry, steam engines and cryptocurrency – as well as several unique European microstates. So it’s a relief to find that in such a world, today’s tech giants still exist and monopolise the same niches they do in our reality. Google gets a handful of uses as a verb and as the goto provider of maps, while Facebook and Twitter each get a shoutout as sowers of chaos, sources of disinformation, and more dangerously, as crucial enablers of the inwardly turning far-right Christian echo chamber of the midwest. This is the world of the 21st century, set on the brink of a schism between the extreme high tech coastal elites and the increasingly isolated tribalists of just about everywhere else.

Fans of the Baroque cycle will be pleased to know that the most enduring eminence gris, Enoch Root has survived to the 21st century, while those who loved the compelling characters of Reamde can rest assured that they will meet at least most of them again. Sadly though, Richard ‘Dodge’ Forthrast doesn’t survive for long, succumbing to brain death in the early stages of the book due to complications in routine, yet unspecified, surgery. That wasn’t a spoiler – it’s right there in the title. It’s part of the essential premise of the novel.

What happens next is an envisioning of the technical and legal aspects of the search for immortality. Because unlike the philosopher’s stone of legend, which merely required a seeker to consume a part of it, Stephenson’s digital afterlife has demanding requirements – an almost unbelievable amount of computing power, with equivalent amounts of money. It’s enjoyable to read, but economic and legal wrangling does not a gripping storyline make.

It almost feels like an afterthought that some of the book’s most jarring and interesting parts have been wedged in. The largest and most elaborate fake news escapade conceivable is handled brilliantly, and is written in a way that makes it seem actually feasible. And it’s not only the credulous who are taken in by it. But this is only tangential to the plot – a meet cute for two of the novel’s main characters, and a mechanism for exploring issues surrounding identity and security.

Let’s talk about the world for a moment. Stephenson’s books have always painted the world as gritty and dysfunctional, but through the actions of the characters – their ingenuity and their inventiveness, we can see the world becoming an altogether better, more civilised place.

This is not the America we know and love

Sure, America’s a bit fucked up even in the real world. From the other side of the Atlantic, we sit on our deckchairs and stare in wonder at baffling scenes of gun-carrying activists congregating in their hundreds on the steps of their local legislature to protest what most of the world would see as sensible precautions to prevent massive numbers of innocent people from dying unnecessarily. It seems weird to us that people would do that. Evangelical preachers insisting that their places of worship stay open during a pandemic seems weird to us too – that those same preachers have being dying in droves after catching Covid-19, fills us with an uncomfortable schadenfreude.

The US has always been a weird place to outsiders. The fascination with firearms, the faith fanatics, the zealots, the greed. That there are huge segments of the population who reject science and medicine – choosing to put their faith in the supernatural. We’ve never been able to tell whether this attitude was serious. Was it self aware irony, like hipster beards and lumbersexuality? Are these people even real? Up until very recently, we hadn’t been 100 percent sure. 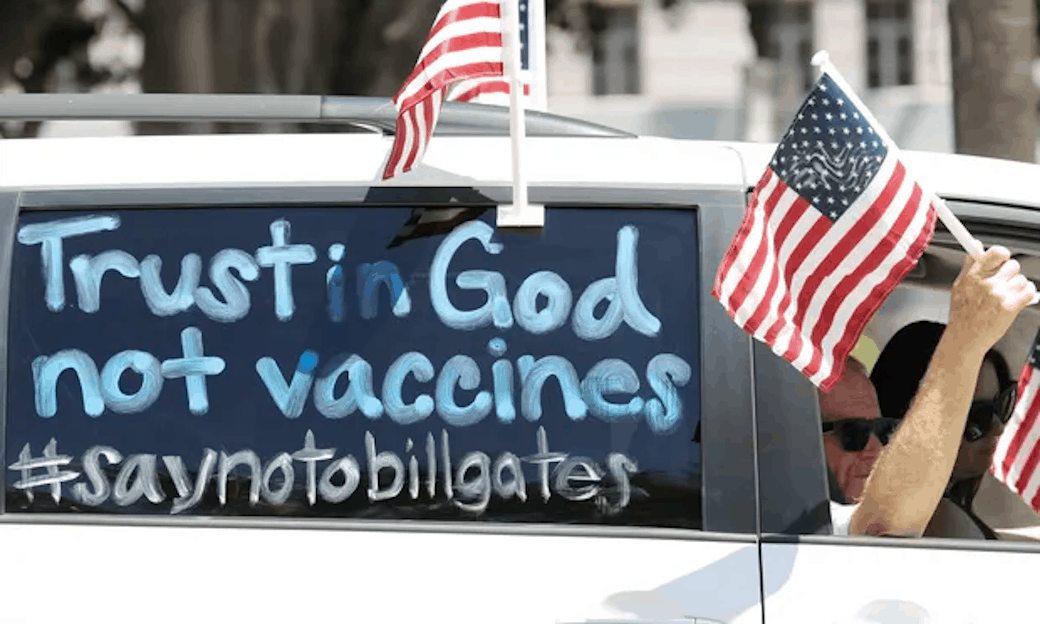 Bill Gates has always struck us as a particularly shady character

Stephenson has taken a country which already caricatures itself pretty well and he’s taken it to extremes – at least we think they’re extremes. This might not be so far out of the ordinary for people who actually live in the southern states. We don’t know.

Away from the ‘coastal elites’, we’re introduced to a fierce red Americana. A land of burning crosses and religious statues reaching into the sky, erected by Christian cults. Roving militias keep the government away, and firearms are everywhere. Traveling through the bible belt – or indeed anywhere away from the major highways is dangerous and requires a guide capable of trading and communicating with the locals.

When we first read Fall, in the latter half of 2019, this picture of America in the near future struck us as unbelievable. Watching the news this month, and actually paying attention to US politics, it doesn’t seem quite so far-fetched.

The coastal elites meanwhile – the cultural and technological centres such as New York, Seattle, and parts of California are ever more technocratic, ever more dependent on machines and computers. More and more of human life and endeavour is given over to what is a virtual technocracy. Along the way Stephenson puts a lot of thought into problems facing today’s internet including the privacy and trust issues which ensue when all information is available to everyone, and mass surveillance by public and private entities is a fact of life. We’ll be honest, through his characters, the author comes up with pretty neat solutions, we’d be surprised if at least some of them weren’t deployed in the real world at some point in the near future.

Dodge, meanwhile, is eventually spun up as a digital immortal in a virtual world – one where the rate at which time passes is dependent on the computing power available. This is where an already fascinating book gets interesting. It also gets a bit shit.

One of these writers was fully immersed in medieval fantasy, living in a castle in rural Ireland, and refusing to have anything to do with the 21st century. Emails were delivered to to the local post office on authentically reproduced medieval era parchment, before being sent, and received emails delivered to the castle by the same method – that kind of guy.

Dodge’s experience in the virtual afterlife – using his old gamer tag, Egdod, is narrated by these two writers, and it turns huge sections of an otherwise excellent and thought provoking multi-generational epic into essentially trash fan fiction. It’s not enjoyable to read chapters and chapters of low quality writing – even if it is an in universe gimmick.

The Afterlife… or just life

The in-universe authors aren’t the only areas in which Stephenson uses a writing style other than his own classic prose. In Dodge’s afterlife, it quickly becomes obvious that he, appearing confused from the electronic void of nothingness is repeating aspects of the old testament – fulfilling the myths of the creation of the world, and the wider universe – bringing in mythologies from disparate cultures, but centering on the old Abrahamic / Judaic beliefs. Dodge’s world grows to reflects the biblical antediluvian apocrypha – particularly the book of Enoch, and as the narrative becomes familiar and the reader starts to recognise aspects of the reality we live in, the question in the back our minds becomes ever more pressing and insistent – Is Dodge recreating our own reality in his, or is Dodge’s new reality the one in which we already live? And just how deep does that rabbit hole go?

You’ll have to read it to find out.