We’re going to make a couple of assumptions about November 2020 here. You’ll have to excuse us, we’re not Americans, and we don’t have the kind of total immersion in your political systems that perhaps we should have before starting an article of this type. We’re not there. We don’t know for sure.

What we do have is blanket coverage of US news media. We read The Atlantic, the New York Times, Washington Post. We watch highlights from Fox News and One America News Network. It doesn’t make us experts, but it gives us a viewpoint you can only really appreciate with the aid of a really big telescope from a couple of thousand miles away. We see everything, and we’d like to think that having a Crow’s eye view gives us a little perspective

For outsiders, we, at The Crow, think we have a pretty good idea of what the situation is on the far side of the pond, and honestly, it’s not looking good fellas.

Can we take it as read that the incumbent is going to lose the next election?

Can we also take it as read that he isn’t going to go easily?

It’s fake news that Joe won. Postal votes are rigged. China interfered. Russia interfered. The EU interfered. It was Iran. It was Hillary in the Ukraine with the email server (Board game joke there).

We’re not partisan. Genuinely. We don’t care. Yes, Trump appears to be a colossal tit, but then, so was W. So was Saxifrage Clinton. There you go: Democrats and Republicans. All tits. Trump, while being somewhat out of the ordinary, isn’t anything new. It’s not like our politicians are much better.

He’s never ever wrong. This isn’t unusual for politicians. Find us one who’ll apologise for a mistake. Ever. It’s all ‘‘I did not have sexual relations with that woman…” Technically maybe true, but no.

Donald Trump is a little different. Flat out denials, demonstrable lies. He’s Teflon Don, and nothing sticks to him - he doesn’t even pretend to be truthful or honest, and his supporters love him regardless. Which is cool, we suppose. The United States is a democracy, and not everybody wants a decent honest individual looking out for their interests.

So whose interests does Donald Trump represent?

It’s certainly not those of immigrants. Nor of Black people or the poor, or the sick or anyone who wants clean drinking water, or has environmental concerns. It’s not LGBTQ people.

The US president, for all his flaws, has a sizeable following. People love him because he’s a model in power-trip wish fulfillment and sticking it to The Man. He does what other people wish they could do, but don’t - because of, you know, laws.

He says things your racist uncle wouldn’t get away with on Thanksgiving. He grabs ‘em by the pussy. He calls white supremacists ‘Good People.’ When the looting starts, he wants the shooting to start.

To an awful lot of people, this is admirable behaviour. They, too, love to say racist things (Just a joke), grab women by the pussy (if only they could get away with it). White supremacists are good people (they’re just standing up for their rights), and are happy to start shooting even before the looting.

Most of these people are in the south, which is not altogether surprising.

They’re Trump’s power base, and they’d love for him to get on with the job of governing their way without that pesky democratic congress getting in the way and stopping him from fulfilling his heartfelt desires.

Let’s say Trump loses, and he doesn’t want to go. What happens then?

Congress can probably force him out of the White House while the Secret Service carries Big Joe in on a gold palanquin and lays him down on the oval office couch.

It won’t get that far. After some days of bluster and recounts, of shouting, of refusing to obey, and claims that he actually did win the election, we predict that Mr Trump will claim authority over the parts of America which did vote for him - whether he won the popular vote in those states or not. If enough white men with guns are ‘peacefully protesting’ on main street, Mississippi, it doesn’t really matter what the real result was.

Surely not. What about the police? What about the national guard? Surely they won’t allow their respective states to carve themselves off from the rest of the country and pledge allegiance to a New York ‘billionaire.’

The second amendment is much quibbled over, and there is some dispute over what its framers meant by the exact wording they used. Did they envision Columbine or Las Vegas or Orlando? Probably not. We doubt they would be particularly impressed.

But the second amendment is pretty unambiguous that it exists to protect against tyranny. If Mr Trump can manage to convince one or more states that by Joe Biden becoming president, they are subject to Tyranny from Washington simps, he’s onto a winner. There are some armed individuals who have been waiting for this opportunity all their lives. Whether they truly believe that Mr Trump is the rightful president or not, they are absolutely not going to miss out on the chance to stand arm in arm against the forces of libtard tyranny.

The national guard can only be called out by state governors, and we think we can predict several who share Mr Trump’s core values and would be completely down with him heading a breakaway republic - a Confederacy of States, if you will.

More or less corresponding to this map | Credit: World Atlas

And it’s not like there would be a huge amount of internal opposition. The South will rise again! has been a rallying cry since the end of the civil war, and in early July, confederate flag waving, armed men descended on Gettysburg with the intention of doing battle against a fictional anti-fascist enemy. It is not an isolated or infrequent example.

It’s not like Mr Trump hasn’t been preparing for this - at least as a contingency plan if everything goes tits up.

Do Texans and Alabamans and Mississippians really want the south to rise again? Maybe. Maybe not. It’s a pretty solid bet that the Black minority don’t. But then, they can just fuck off to the north. Problem solved for everyone.

Take a look at the picture we’ve used as our header image. It’s the First White House of the Confederacy in Montgomery, Alabama. After the Civil War, the United Daughters of the Confederacy planned to buy it, but for various reasons, couldn’t. The UDC is a neo-confederate group with very close ties to the KKK. They love confederate statues, they love the lost cause mythology. They distribute “literature that claims most African Americans were ready and willing to serve slave owners and that northern nullification of southerners’ rights forced the war between the states.”

Its membership in 2015 was 19,000. Not huge, but not insignificant either - and the fantasy we’re drawing here would be an absolute knicker dropper to most of them.

It (the house, not the UDC) was eventually bought by the White House Association of Alabama with the aid of a $25,000 donation from the Alabama legislature. Currently, the upkeep of the First White House of the Confederacy is subsidised by Alabama tax payers to the tune of $100,000 per year, keeping it perfect and ready for its new owner to move in when the south does rise again. So we’re fairly sure that Alabama, and most of its lawmakers, would be on board. 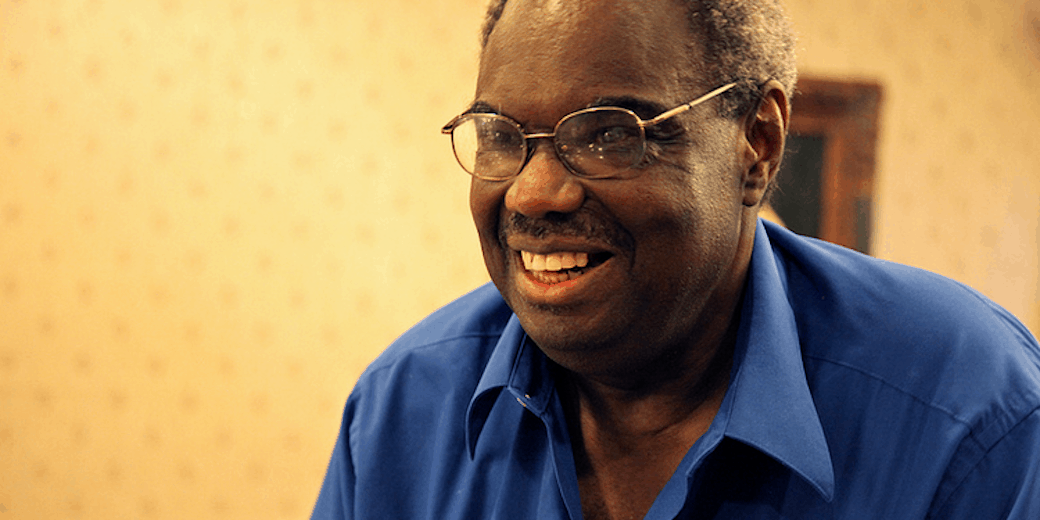 Probably not Alabama Senator Hank Sanders though. We can't think why. | Credit: San Diego voice. Also, you should read the linked piece he wrote for them. It's almost prophetic.

We don’t think we even need to say anything about Mississippi, but we’d like to think Florida would stay out.

Obviously, Mr Trump is facing problems at the moment - not least that his favourite platform, Twitter, has straight up called him a liar and accused him of inciting violence - he expects to be banned by the end of the year. How can the first president of the Second Confederacy communicate effectively with his base? Even Parler which bills itself as the last bastion of free speech has rules on basic decency and behaviour. We can see Trump falling foul of them quite easily.

We’re fans of Free and Open Source Software here at The Crow, and we recommend that he sets up a Mastodon or Pleroma instance in his new residence. Assuming Alabama’s internet can handle it.