Imagine The Fallout series of games if the world had never fallen to nuclear apocalypse and was able to colonise the stars. Or Skyrim in Space. Or Bioshock Infinite if it was an open-world exploration game rather than a strictly limited, almost on-rails murder fest.

The Outer Worlds, released by Obsidian Entertainment in October 2019, resembles all three of these concepts, taking the best of each – and while it falls short of the awe-inspiring wonder of exploring Skyrim for the first time, it is the game Fallout 4 should have been, and pays tribute to the hyper-capitalist feel and slightly cartoon-like visuals of Bioshock Infinite.

The Outer Worlds is a mish-mash of a game, and it is glorious. 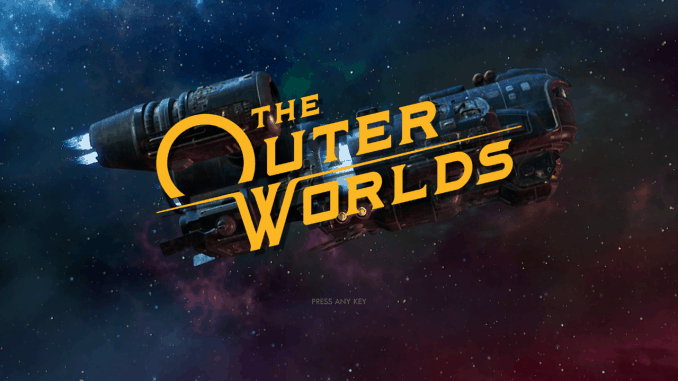 As you’d expect, The Outer Worlds is set in space and the scene opens to you, the silent protagonist of the story, being rescued from cryogenic storage on a mislaid colony ship by the puppeteer of the game, one Phineas Welles – an outcast scientist living alone on a private asteroid – who needs you to go on a series of supposedly straightforward missions, in order to safely revive your fellow would-be colonists from their frozen state.

The solar system in which the story is set is owned by a corporate conglomeration, and after a mishap results in you becoming the master and commander of a starship, you are free to travel between and explore worlds – provided you have the correct navkey, that is.

The atmosphere feels like a neat splice of a 1940s noir, a spaghetti western, and a golden age science fiction novel – there are no skyscrapers here, there are frontier towns, with ragged settlers held down by the yoke of corporate domination. The glory of futuristic space travel pales for most residents of the Halcyon system when yours is the only ship they’ve ever seen. Phineas Welles is a clear self contained reference to so very many science fiction authors, directors, characters, and tropes that it would be hard to list them all here.

What does an alien biosphere look like? Fans of classic Star Trek know that it closely resembles the deserts of southern California, complete with quarries, disused mines, and the occasional tar pit, lying in wait to ambush and murder your chief security officer. Arthur C Clarke fans might envision something a little different.

The planets of the Halcyon system, together with their diverse collection of flora and fauna resemble nothing quite so much as earth. The trees look like trees – they generally have a single trunk and a large canopy. The animals look like earth animals. There is no nebulous collective jellyfish consciousness here. All the beasties you run into have a standard skeleton and rib-cage, an appropriate number of legs, two eyes, a mouth, etc.

Sure the colours are different, and its unusual to find poison sacs on earth mammals, but everything is recognisable for what it is. No walking trees, no tar monsters.

But the weird colour schemes do make a difference to the atmosphere of being on an alien world – as does the presence of a massive gas giant in the sky, above one world, rings encircling another, or giant rocks hung in suspension above Scylla – an asteroid settlement.

Your ship – The Unreliable is stone cold Firefly. 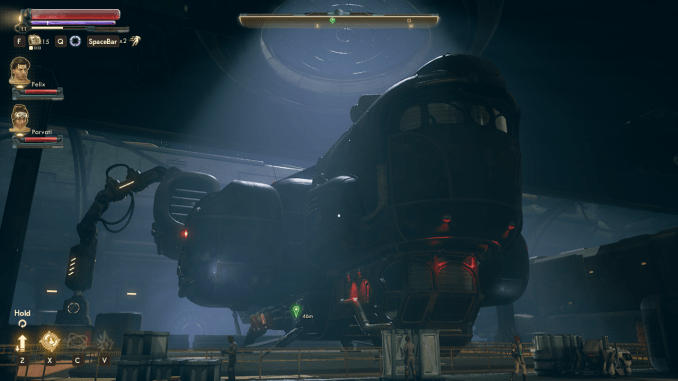 No open world adventure is complete without companions, and The Outer Worlds has (we think) six. Each with their own complicated back story, motivations, perks and personal quests for you to fulfil.

The Firefly homage is strong with the first two companions you meet. There’s a female engineer in search of a date, and a vicar searching for forbidden knowledge (and who can’t read French). In addition, there’s a psychotic killer plucked from a life of cargo loading, a cleaning robot who sprays acid, and a medic with a grudge against her parents. There may be more companions, but we haven’t met them yet.

Each companion has their own abilities which can augment your own and each can be levelled up and given perks. While you can’t directly offload your own excess crap into your companions’ inventories, venturing forth with them in your party will increase your own carrying capacity.

Up to two companions can accompany you from The Unreliable, and can be super useful in combat – as well as boosting your own stats in areas such as engineering, locking, or plain old murder, its nice to know that you’re not alone in wreaking havoc and carnage on the far side of the galaxy.

This is where The Outer Worlds reveals its true heritage. While the game does have a central quest line, it’s simply not possible to speedrun through it in a few hours. Every stage of the quest involves countless side quests, which themselves spawn further side quests. As the side quests branch further from the trunk quest, some optional elements appear, and believe us, it is tempting to ignore the optional elements, just to advance the main storyline that little bit more.

Most character builds can complete most quests. If you’re dialogue skills (lie, persuade, intimidate) aren’t high enough, and the the stealth skills aren’t up to scratch, the player can simply kill everyone in the room, and blast off into the aether on the unreliable.

Unfortunately, it isn’t possible to do create a pure dialogue / stealth character. While most interactions with NPCs can be resolved that way, encounters with wild beasts on the road can’t always be avoided and it becomes necessary to spill blood.

Weapons at your disposal range from the mundane to the fantastic. Machetes, Plasma cutter, glowing scythes, and can all be upgraded and repaired at workbenches throughout the worlds and on your own ship. Our favourite class of carnage facilitators is the Science Weapon – proper old schook science fiction staples including the shrink ray, which miniaturises or opponent even as you sap life from his diminutive form.

Armour, unsurprisingly decreases the damage you take from attacks, and can also be repaired and modified.

Everyone you interact with has an agenda or a plan. Mostly these plans involve the betterment of mankind in some way – they’re just competing views on how to run a distributed colony in the far reaches of space. Some of them you’ll agree with, some of them you’ll disagree with, but the game makes you choose a side each time, and to help one faction is to harm another, and people will die based on your decision. Even if you manage to make it through without physically harming another sentient creature, there will still be blood on your hands.

The big bad uglies in the outer worlds, the villains of the piece, as it were, are more an example of bureaucratic incompetence than actual co-ordinated malice. Regardless of your feelings towards towards the game’s central themes of corporate greed, individual freedoms, philosophy, science, and religion, you will enjoy every blow you strike against the board.

You, the character are the main hero, of course. Or the main villain. You can ruin lives; You can commit cold blooded murder against named individuals in their own home; You can threaten or extort. This won’t win you any friends, however and your reputation will suffer as a result. You can play the white knight, and always make the moral choice, basking in the affection of your friends, companions, NPCs, and ADA, the ships’ computer. It’s up to you.

The Outer Worlds is a return to form for Obsidian. It’s funny in a dark way, and the dialogue choices are often absurd. It’s weirdly fun in the same way that FAllout New Vegas was weirdly fun. We like it, and could even view it as a drect sequel – taking place in the Fallout universe long after the dangers of radiation had long passed – loading screens make reference to The Great War, but we are never given the details. Or it could be the world if nuclear oblivion had never arrived.